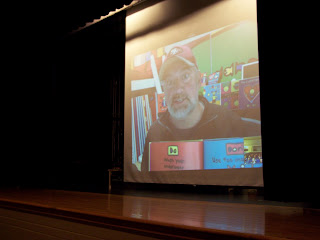 A little over a week ago, the second grade students at our school had the honor of meeting children's author and illustrator, Todd Parr via Skype.  This is the second year in a row we kicked off our Skyping with Todd Parr, and once again he didn't disappoint.  Each second grade class brainstormed things that they wondered about him.  During our Skype visit, he answered one question from each of the eight second grade classes.  Students learned where Todd gets ideas for his stories, how long it takes for him to get a book published, what his favorite children book to read is, what his favorite book is that he has written, and how he became an author.  As a special treat, we met both of his dogs.  He also read, Underwear Dos and Don'ts and his newest book, The Thankful Book (which he told us we were the first to hear him read it).

Prior to his visit I used a modified version of this lesson from Read Write Think, It's Okay to Be Different: Teaching Diversity With Todd Parr.

Some Wonders from Wondeorpolis that can be used with Todd Parr books are:

Enjoy the Smilebox below!  I chose the dog theme in honor of Todd Parr's love for dogs.  He shared that he would have LOTS of dogs if he had the room.